This course takes a close look at women writers in England, from the medieval period through the eighteenth century.  We will view their work within a historical, social, biographical, theoretical, and critical context.

The course builds on earlier waves of women’s studies and women’s literary studies. The first phase in 1960s and 1970s sought a voice for women scholars as well as for women writers, which led to the establishment of theoretical women’s studies programs in the 1980s.  In the 1980s scholars focused primarily on the “recovery” of unknown women authors (most notably through the Brown Women’s Writers Project, founded at Brown University in 1986, and dedicated to making available hand-typed transcriptions of women’s works published in their own time but not available in any modern edition).  The 1990s and early 2000’s witnessed the merging of women’s studies with gender studies (in an effort to include men as well as women and multiple sexual orientations). In the last fifteen years, scholars have reviewed women’s writing through a more critical (vs. biographical) lens. New digital technologies led to new ways of recovering “lost” early women writers and the social networks in which their works circulated. As a result of all these movements, early modern women writers are no longer non-existent, as was the case in the academy through the late 1980s.

Incorporating both old and new discoveries and formats, this course will open your eyes to a blazing new world of early women writers from Marie de France to Mary Wroth, to Mary Wollstonecraft.  Readings will include, Marie de France, “Lanval” (@1155); Christine de Pizan, The Book of the City of Ladies (1405); Elizabeth I (1500s); Amelia Lanyer, “The Description of Cooke-ham “(1611); Mary Wroth, Pamphilia to Amphilanthus (1621); Margaret Cavendish, The Blazing World (1666); Fanny Burney, Evelina, or the History of a Young Lady's Entrance into the World (1778); and Mary Wollstonecraft, A Vindication of the Rights of Woman (1792). Big cities were new in the 19th-century U.S.—and triggered new forms of consciousness and representation. This course traces the growth of urban literature from the period before the Civil War into the 20th century. We’ll “visit” Boston, New York (a lot), and Chicago—and we’ll consider the city as a space of capital, consumption, and labor. We’ll read mostly novels, which became THE method for plumbing the depths of modern, urban experience and consciousness—by such writers as the Jewish-American immigrant Abraham Cahan and the Harlem Renaissance observer Nella Larsen. But we’ll also look at Edgar Allan Poe’s tales, Fanny Fern’s urban journalism, and Jacob Riis’s documentary photos; and we’ll end with a silent film: The Crowd. Other writers may include Horatio Alger, Nathaniel Hawthorne, Rebecca Harding Davis, Theodore Dreiser, and James Weldon Johnson. We’ll consider theories of urban space, consciousness, and expression that will open up all that we read and view. Assignments will include: summaries of theoretical and critical readings, short response papers on specific texts, an annotated bibliography, oral reports, a 5-page paper, and a 12-15 page research paper. 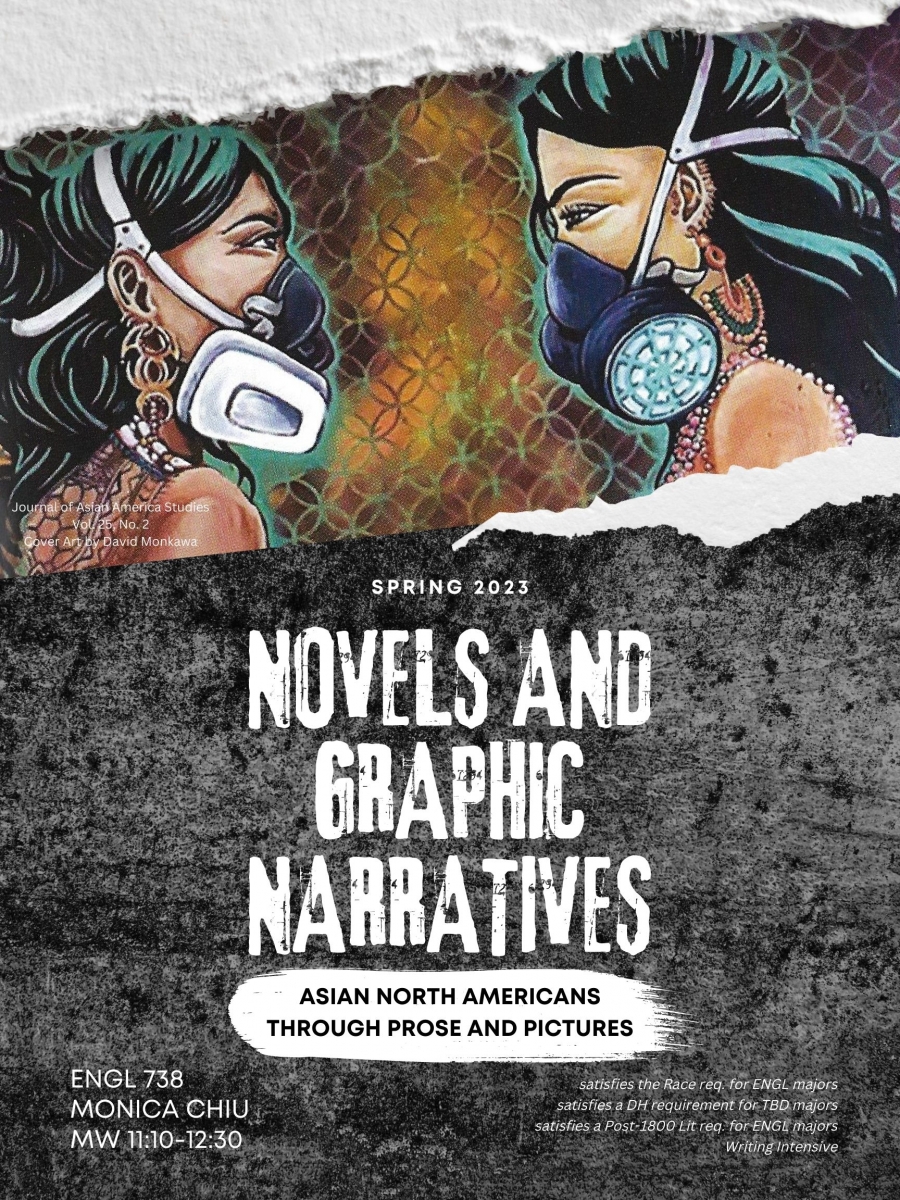 “I’m not a virus” resonated among Asian North Americans during the height of anti-Asian violence, instigated by the Covid-19 pandemic. With allies, they railed against a resurgence of the repellant notion of a Yellow Peril. They called for better understanding and new representations of Asian North Americans. What do you want to learn about the histories, cultures, and stories of Asian North Americans? This course will use both very contemporary written works (novels, short stories, poetry) and the medium of graphic narrative to widen our understanding of who Asian North Americans are as expressed in their own words and self-images. Possible course texts include the following pairings: Cao’s novel Monkey Bridge with GB Tran’s graphic narrative Vietnamerica; Ng’s novel Everything I Never Told You with Chong and Webber’s graphic pathography Dancing After TEN; Otsuka’s novel When the Emperor Was Divine with Tamaki’s collection of graphic narrative vignettes Boundless, among other titles.

Click to see:   Booklist
Durham   Liberal Arts :: English
Save this Course
Credits: 4.0
Term: Spring 2023 - Full Term (01/24/2023 - 05/08/2023)
Grade Mode: Letter Grading
Class Size:   15
CRN: 56368
Courses offered under this number focus on topics within creative writing, such as poetic influences, the short story form, and writing the novel. The precise topics and methods of each section vary. Barring duplication of subject, course may be repeated for credit. For details, see the course descriptions available in the English Department.
Department Approval Required. Contact Academic Department for permission then register through Webcat.
Repeat Rule: May be repeated for a maximum of 12 credits.
Instructors: Jaed Coffin
Additional Course Details:

In this course, we’ll be focusing on the ancient and recently resurgent genre of the spoken story. While spoken narratives pre-date written ones, the dominance of text as the default vehicle for storytelling has recently been challenged by live platforms like The Moth Radio Hour, Storycorps, TED and many, many others. In the first half of the semester, we’ll be engaging with these various platforms, studying them for structure and image, lyric and movement (just as we would with any narrative). In the second half of the term, we’ll be developing our own stories and learning how to produce them for both live and digital consumption. Students should be prepared to “perform” narratives in this class—a skill that will draw on the poet’s mind for memorization and compression, the fiction writer’s mind for plotting and pacing, and the nonfiction writer’s mind for engaging with the raw material of personal experience. The semester will end with a (small scale) live storytelling event.